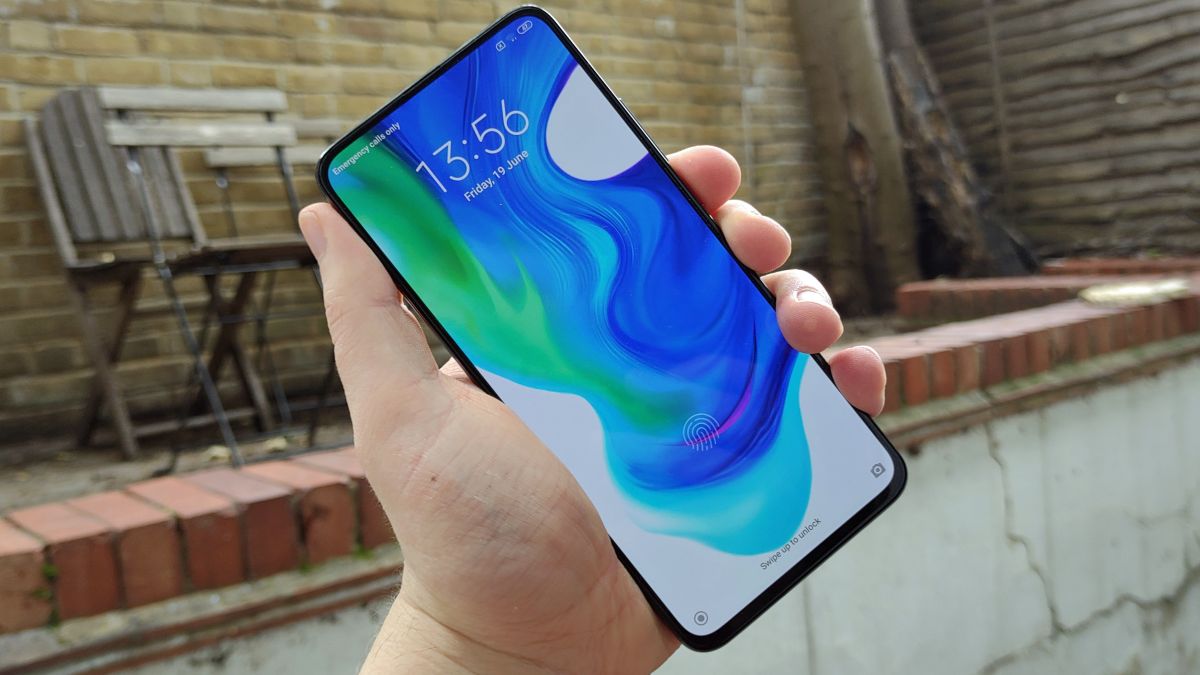 The Xiaomi Poco F2 Pro feels like the kind of phone OnePlus would put out, with high specs but only a mid-range price tag, and it seems like a pretty premium phone in a few ways, although there are clear signs that it isn’t, including the flat screen and lack of zoom camera. All in all we were fairly impressed by our first experiences with the Poco F2 Pro, though we’ll have to test it further to be sure.

The Poco F2 Pro is the successor to the Pocophone F1 from late 2018, a popular budget phone put out by Xiaomi’s sub-brand Pocophone which, for a long time, looked like it wasn’t going to get a follow-up. Well, the newer phone is here now and it’s not got that much in common with its predecessor.

One of the most interesting parts of the Poco F2 Pro is its pop-up camera – quite a few phones packed this feature in 2019, but in 2020 we’ve barely seen any. Pop-up selfie cameras can be quite a divisive feature, but we’re fans, and few can deny the resulting all-screen display (not broken up by notches, or overshadowed by large bezels) is a treat.

In general the Poco F2 Pro seems to be a mid-range phone with some specs that top-end phones have, like its Snapdragon 865 processor and 64MP main camera – in this way it feels like the kind of phone OnePlus would have put out before it embraced premium-ness, and it’s likely going to compete with the rumored OnePlus Z when that launches.

We haven’t used Xiaomi’s Poco F2 Pro enough to write a full review yet, but until we do, here are our initial impressions of the phone after a day of using it.

The Poco F2 Pro was announced in May 2020 and its release was staggered by region after that – in the UK its release date was June 19.

The phone costs £549 in the UK, which converts to roughly $680, AU$990. We wouldn’t expect the phone to come to the US, as Xiaomi doesn’t sell phones there, but it does in Australia, so while the handset hasn’t been announced there at time of writing, it certainly could appear there before too long.

The Xiaomi Poco F2 Pro feels like a pretty bulky phone – it’s got a big display at 6.67 inches, which may be part of the reason why, but it also seems pretty thick and heavy too.

The screen is AMOLED with a 1080 x 2400 resolution and HDR10+, and it has a 20:9 aspect ratio, so it’s rather long and thin. Thanks to the pop-up mechanism hiding the front-facing camera inside the phone, the screen takes up the entirety of the front of the handset, unbroken by notch or cut-out.

Content viewed on the Poco F2 Pro looks pretty good, mainly because of the resolution and HDR10+, but also because of how movies and games can fill the whole of the screen – this makes a noticeable difference, and we quickly came to appreciate it. Due to the different aspect ratio of TV shows, though, there wasn’t as much of a difference when viewing those, since there are always large black bars at the side of shows anyway.

We did feel the Poco’s brightness was often a little dimmer than we’d like when we used the auto brightness, and we found ourselves manually turning it up frequently, especially when watching dark movies.

The screen is flat, unlike many other mid-range and premium phones with curved displays. Since tapered screens are still maligned by many phone users, it feels like Xiaomi is taking advantage of a hole in the market for top-spec’d phones with flat displays.

In terms of design, as we’ve said the Poco F2 Pro feels like quite a big phone, and we can imagine people with smaller hands might have to stretch to get them around the device. The power button was low enough to be easily reachable, on the right edge of the phone, but above that the volume rocker felt a bit of a stretch to get to. Also, the in-screen fingerprint sensor felt higher than it should be, as we often found ourselves extending our thumbs to reach it, and it would be much more natural to touch if lower down.

The phone has a USB-C port on the bottom, and a 3.5mm headphone jack on the top edge. We’re not fans of this placement for the headphone port, but if you’re a fan of wired headphones you’ll be happy enough just getting such a feature on a phone at this price tag.

As we’ve already said, there’s a pop-up mechanism here for the front-facing camera, and this is a little more flashy than most as it has LEDs which light up when the camera is rising or lowering. This felt quite sturdy when extended, which is notable as some on other devices feel like a gust of wind could knock them off, and on top of that there’s accidental drop detection, so the pop-up retracts when the phone is falling.

The back of the handset boasts a large camera array, with the device’s four lenses housed in a prominent circular bump similar to Huawei Mate 30 phones. This bump sticks out a fair way, as is becoming regular in Xiaomi phones, but looks quite classy, so we’re a fan of this.

The Xiaomi Poco F2 Pro has four rear cameras – a 64MP main, 13MP ultra-wide, 5MP macro, and 2MP depth-sensing snapper. We haven’t tested the phone out enough to provide conclusive verdicts on its camera capabilities, but from our brief time using it, it feels pretty good.

The main camera is quick to focus and takes pictures that are full of detail, look fairly bright and punchy, and have pretty impressive depth of field for a smartphone camera, this last one possibly thanks to the depth sensor. Our initial tests made us excited to test out the device further.

The ultra-wide camera seemed okay, with little distortion at the sides, although pictures seemed a touch grainy in darker areas, so maybe save it for those outdoor vista snaps.

We were impressed with the macro camera – generally in smartphones these are 2MP, and 5MP is a jump up. This might be the first smartphone macro camera to actually be any good, as it took close-up pictures well.

The Poco F2 Pro supports video recording at 30fps up to 8K, and 60fps up to 4K, so it’s one of the more affordable phones that lets you shoot in 8K. It also has slow-mo in the standard 960fps.

The selfie camera here is a 20MP snapper, and while pictures taken with it seemed good quality, they were very bright. It seems to us the post-processing is a little overzealous in brightening snaps taken in normal and Portrait mode with this camera.

The Poco F2 Pro battery capacity is 4,700mAh, which is fairly standard for a phone at this price point, and we’d expect it to deliver the handset through a full day of use, although we didn’t get to test this hypothesis. Still, during our time with the handset the battery didn’t drop too quickly.

Charging here is 30W, which is pretty snappy and in line with rival handsets like the OnePlus 8, so we’d imagine the phone would take less than an hour to power up to full.

The Poco F2 Pro has a Snapdragon 865 chipset, making it one of the most affordable handsets with it (though beaten by a few gaming-focused phones like the Black Shark 3 and Nubia Red Magic 5G), and this is paired with 8GB of RAM – though we actually tested a version with 6GB of RAM that’s being released at a later date.

We put the phone through the Geekbench 5 benchmarking test and it returned a multi-core score of 3,367 – that’s the third best of any phone we’ve tested so far, beaten only by the iPhone 11 Pro Max and OnePlus 8, and trumping the Motorola Edge Plus and Oppo Find X2 Pro.

Presumably the phone will be pretty great for gaming, then, although we didn’t test it in this regard, and will save that for the full review.

The Poco F2 Pro runs Android 10 as its operating system, with Xiaomi’s MIUI 11 laid over the top. MIUI is a popular Android ‘fork’ but it has its issues too, like quite a bit of bloatware, although it has some perks too like an app drawer divided into app types (like games, or communication) to ease navigation.

MIUI could be really great if Xiaomi solved the bloatware problem, especially as many of the already-unwanted apps and games come with extra adverts and microtransactions packed in, making them even more deserving of deletion.

The Poco F2 Pro seems to tick a lot of boxes from our initial time with the phone, and we’re intrigued to see if these hold up as highlights by the time we’ve written our full review, or if holes will begin to appear.

The cameras seem good and there’s plenty of processing power under the hood too. You’ll also like the phone if you like flat displays or pop-up cameras.

The Poco F2 Pro might be a bit too big for people with smaller hands though, so if that’s you or you want a device you can easily use one-handed, this might not be the phone for you. In addition, we’d really like Xiaomi to fix its bloatware issues in MIUI so we can stop complaining about it every time we write a Xiaomi review.

What is a hands on review?

Hands on reviews’ are a journalist’s first impressions of a piece of kit based on spending some time with it. It may be just a few moments, or a few hours. The important thing is we have been able to play with it ourselves and can give you some sense of what it’s like to use, even if it’s only an embryonic view. For more information, see TechRadar’s Reviews Guarantee.