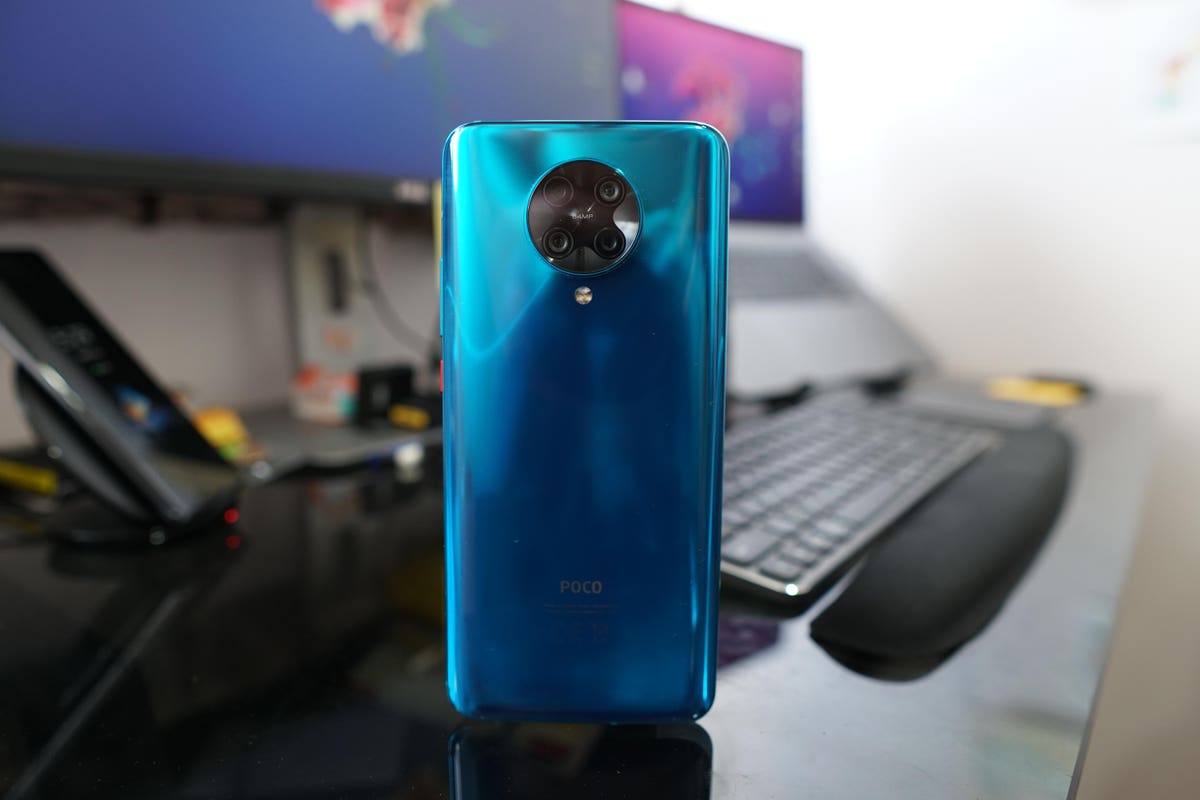 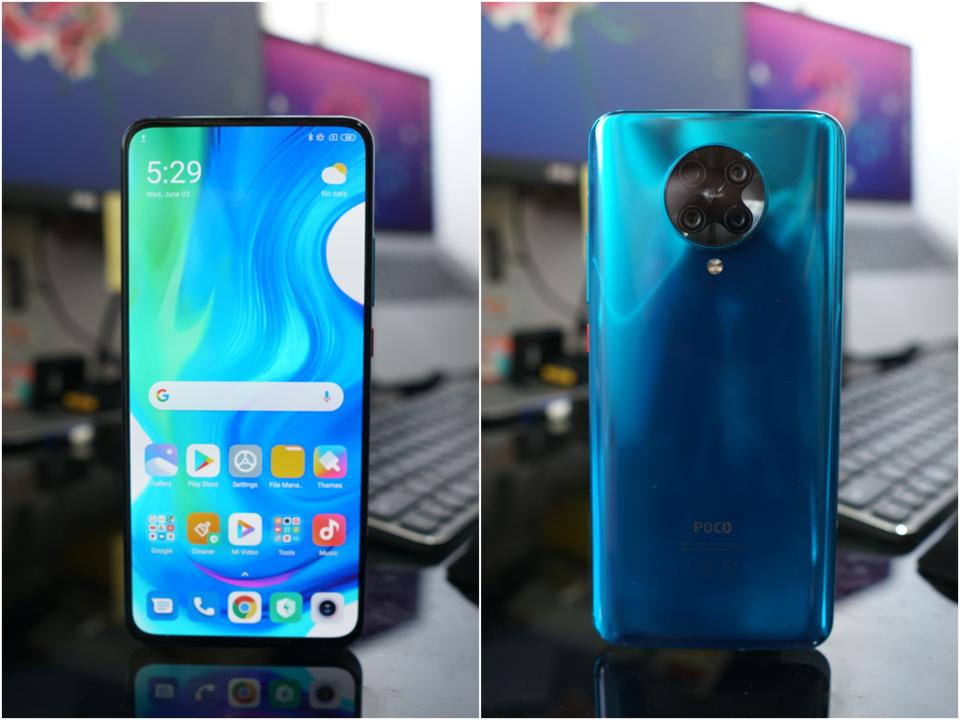 Two years ago, Xiaomi launched a sub-brand named Poco that impressed the market by offering what was at the time the tip top Snapdragon 845 chip in a $300 device. This month the sub-brand is back with a sequel device, the Poco F2 Pro.

Truth be told, the Poco F2 Pro is very similar to Xiaomi’s recent releases—and that’s a good thing: video performance in Xiaomi phones are among the best in Android; they all have a very good macro shooting mode; and the haptic vibration engine here is as good as the one seen in the Mi 10 Pro, which means it’s very good, and noticeably better than the mushy haptics of Huawei and Vivo devices.

There’s one major differentiating point that set the Poco F2 Pro apart from other recent Xiaomi releases—or, for that matter, other brand’s recent releases too.

It is the only smartphone released so far in 2020 with an entirely uninterrupted display. This means no iPhone-like notch and no hole-punch cut-out, the latter has become standard across all Android phones.

Xiaomi didn’t come up with a new trick to get rid of any display interruptions—it merely returned to an older trick: the pop-up selfie camera. 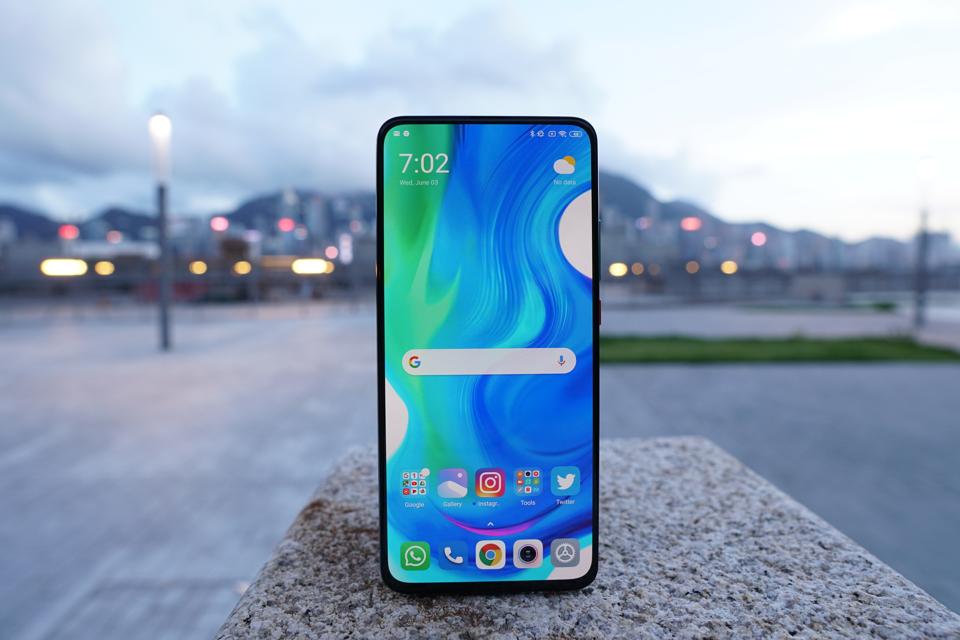 The Poco F2 Pro has an uninterrupted display without a notch or hole-punch cut-out. 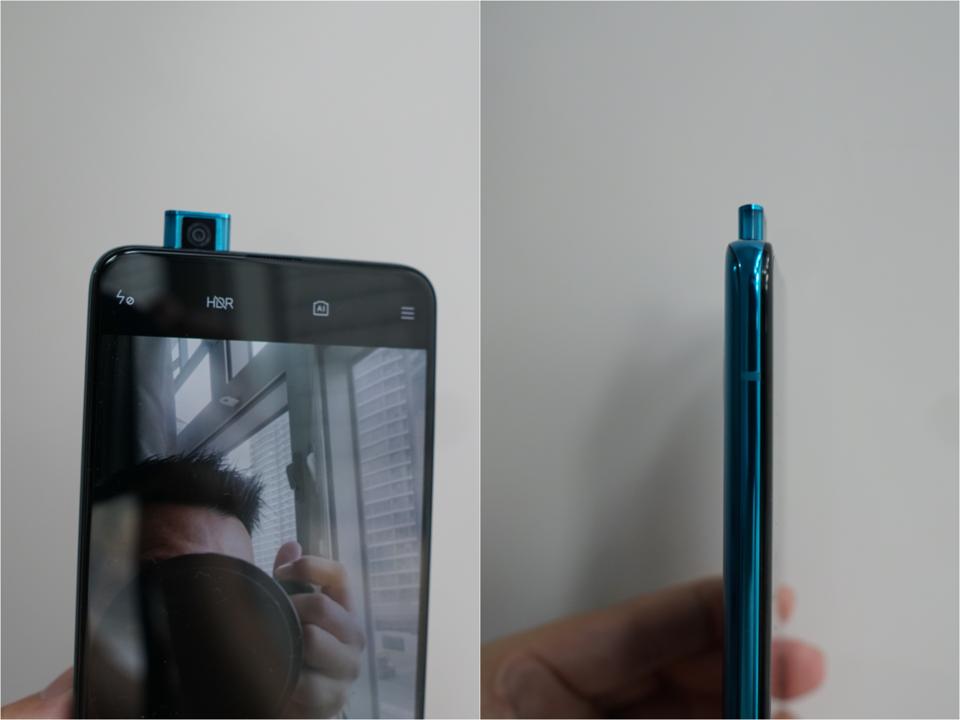 From innovation to throwback in 24 months

That the pop-up camera design has come and gone is quite a testament to how fast the smartphone space moves and evolves. Just two years ago, at Mobile World Congress in Barcelona, I was among a half dozen or so tech writers who were given a sneak preview of Vivo’s Apex concept phone, which featured a then unheard-of pop-up selfie camera. That phone’s design stole the show, made every best-of MWC list, and interest in the news was so high my YouTube video of the Apex drew over 1.2 million views. A few months later, Vivo put the design into a commercial device. Then, OnePlus, Xiaomi and Honor borrowed the design. And now that trend had basically been scrapped, with every brand moving to the hole-punch cut-out, which is not as visually appealing but more durable and practical.

That the Poco F2 Pro uses the pop-up again is a throwback—and perhaps the company recycling older parts to justify its lower price point. But you know what? I like it.

Now, I don’t mind the hole-punch cut-out used in 2020 phones at all—it is far, far better looking than the iPhone’s notch—but an entirely uninterrupted screen is still the ultimate gadget dream. And for all the concerns of a motorized pop-up camera’s durability, I have yet to have one fail on me, nor have I heard of such a case online. Put it this way: potential Poco F2 Pro users don’t have much to worry about.

The Poco F2 Pro retails in Europe for 499 euro, which is noticeably higher than the original Pocophone, but is still one of the lowest-priced Snapdragon 865 phones on the market.

A major reason for the increased pricing of 865-powered Android phones this year is because the 865 chip doesn’t include an on-board modem, and Qualcomm is forcing all customers to buy the 865 chip in tandem with its 5G modem. The option to use a 865 chip with a more cost-efficient 4G modem is not a possibility. This is a bummer for 90% of the world’s consumers, to whom 5G is still not ready.

So how did Xiaomi manage to keep the F2 Pro’s pricing relatively low at 499 euro, when its own top dog Mi 10 Pro (also Snapdragon 865) caught flack for reaching the four digit mark?

Compromises had to be made, of course. Here’s a rundown of where the Poco F2 Pro falls short of the conventional 2020 flagships: the F2 Pro doesn’t support wireless charging, despite the glass back. It doesn’t have water-resistance rating, though I used it in the rain for half an hour without issues. It doesn’t have a dedicated zoom camera at all, so any zooming on this device is entirely digital crop. And the display refreshes at the traditional 60Hz instead of the higher 90 or 120Hz seen in other new phones. 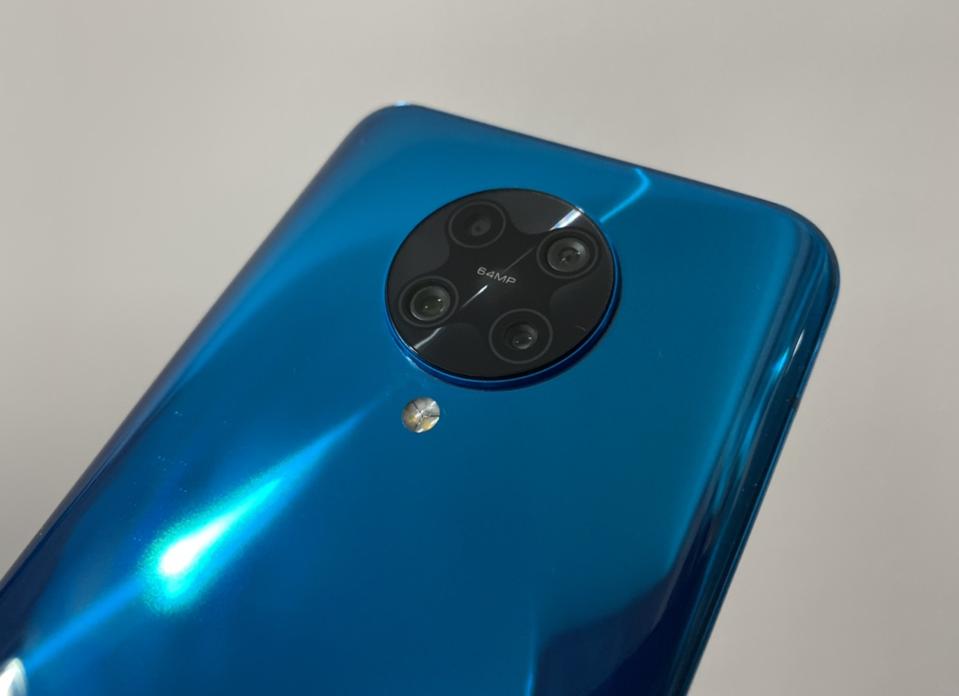 The Poco F2 Pro has a quad camera system. 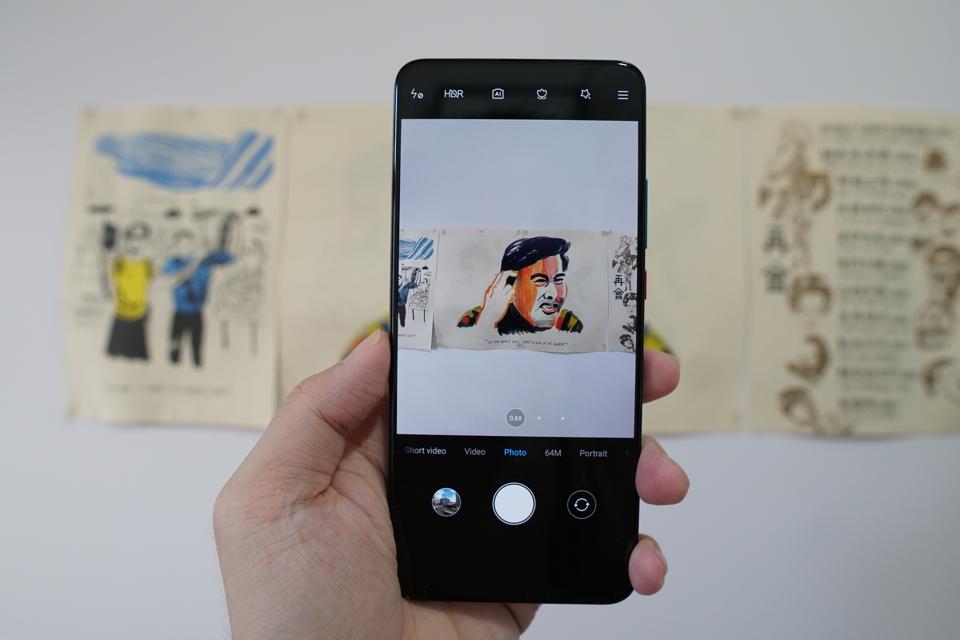 The 13-megapixel wide-angle camera gets the job done under good lighting conditions.

That’s about it; everything else about the phone is up to par with what I’d expect from a flagship. The 6.7-inch 1080p OLED screen looks great, the processor is obviously powerful. I think the above list of compromises is worth saving $400 to $500 for those on a budget.

The F2 Pro’s pop-up 20-megapixel selfie camera works well. The main quad camera system on the back is good for its price tag. It consists of a 64-megapixel Sony IMX686 main sensor, a 13-megapixel ultrawide lens, the main camera is a 64-megapixel Sony IMX686 sensor, and it’s very fast to focus and produces lively colors without exaggerating contrast too much. The 13-megapixel ultrawide-sensor is acceptable at this price point but falls way short of what Huawei, OnePlus and Oppo did with their more pixel-dense ultrawide cameras. Then there’s a 2-megapixel depth sensor and a 5-megapixel macro lens, both work well. 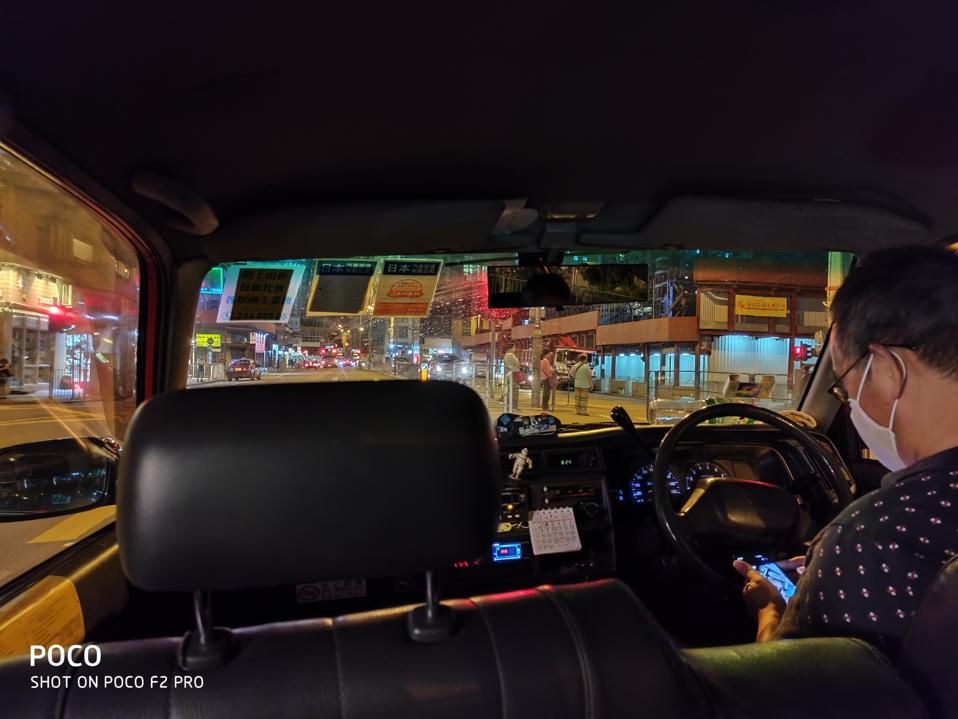 A low light image captured with the main camera, with night mode turned on.

The lack of a telephoto lens means any zoom images above 3x start to degrade in quality significantly. As someone who’s been zooming 10x without much loss in quality with a Huawei phone, this took some getting used to. The ultrawide camera is best used during the day, as details become soft at night, and it struggles with dynamic range. In the sample photo below, the wide-angle image of the Xiqu Centre in Hong Kong blows out all the lights. 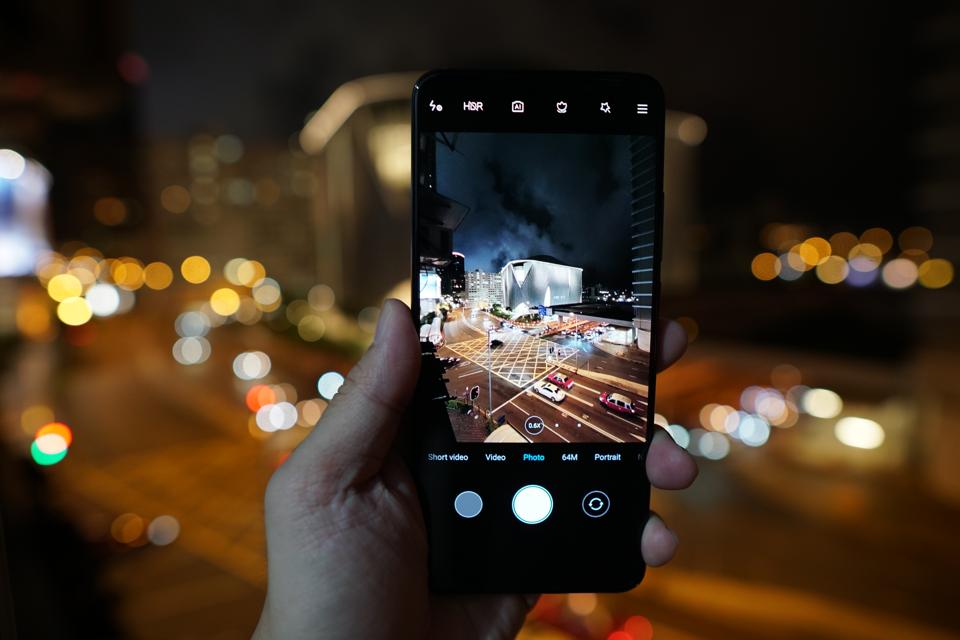 Using the ultrawide camera at night results in blown out lights. 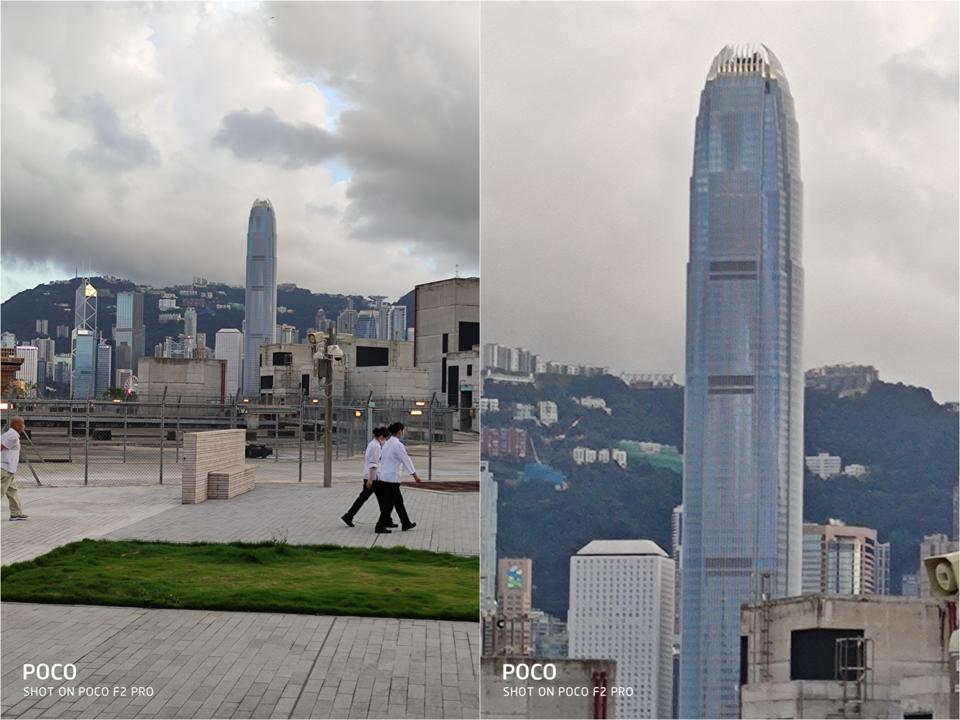 The main camera is great during the day. At night, it suffers from the usual dynamic range issues, but Xiaomi’s computational “night mode” is very good at fixing the issue. I shot almost exclusively with night mode on anytime the sun set. 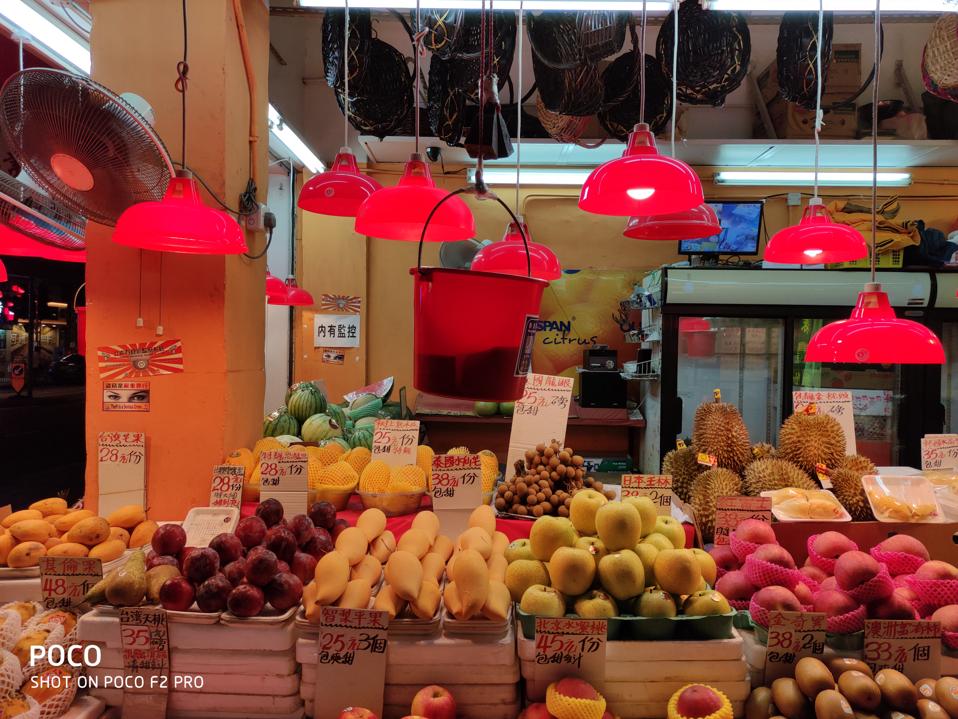 Video performance, as mentioned, punches way above its price range. Xiaomi’s image stabilization is excellent, and I was able to capture smooth 1080p footage and a fluid zooming action. One major gripe is once video has begun recording, it cannot switch to ultrawide camera. This is a problem found in all Xiaomi devices.

The app tray makes the difference

The Poco F2 Pro runs Android 10 with a customized software skin named Poco Launcher on top. Poco Launcher is basically just Xiaomi’s MIUI but with an app tray. This is great, because I already enjoy MIUI quite a lot—it’s fast, with cute animations and the only shortcoming being the omission of an app tray (apps in Xiaomi phones must all sit on the homescreen like an iPhone). 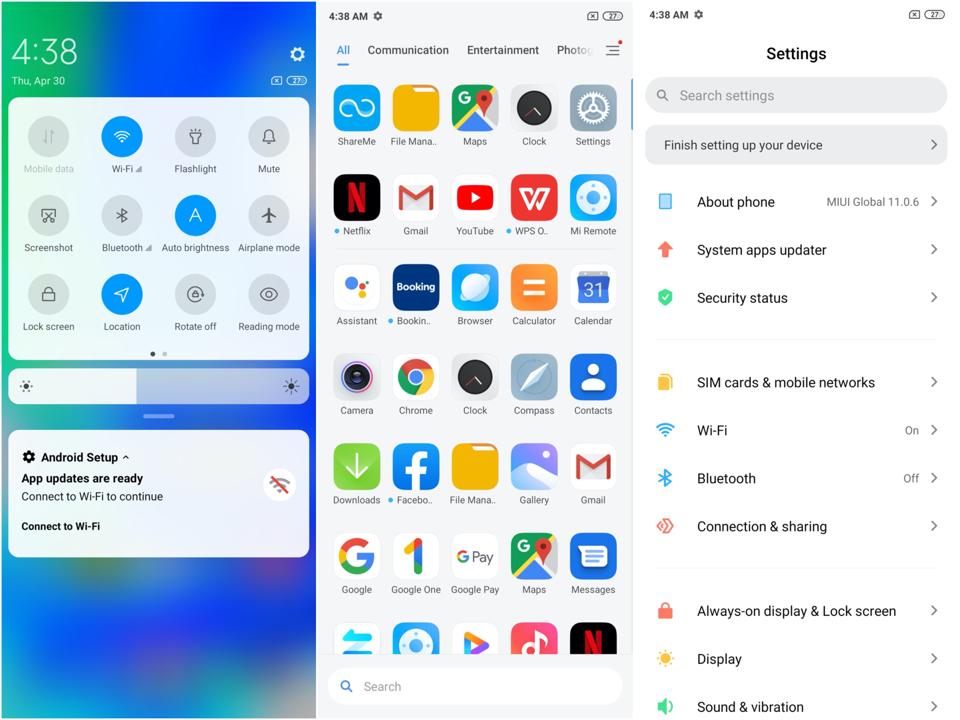 The Poco Launcher is very similar to Xiaomi’s MIUI.

There’s a 4,700 mAh battery here that lasts all day easily. The fact that the screen only refreshes at 60Hz is a major factor. Personally, I have gotten used to high refresh rates and the 60Hz here is disappointing, as animations just don’t zip around as fast.

But there’s no denying that the $550-ish Poco F2 Pro is one of the best values today, as most top releases venture close to the $1,000 mark. Whether it’s the best deal around depends on what your needs are. Realme’s X3 SuperZoom offer a dedicated zoom camera with a high refresh rate for around the same price, but the F2 Pro offers an uninterrupted screen and a more powerful Qualcomm processor with 5G support, if you happen to be the rare person on earth who actually can get easy 5G coverage.